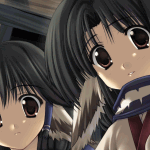 A man, struggling to retain consciousness, noticed two girls. The older one explained how her grandmother is treating him while the younger one curiously watched. Before blacking out, he managed to thank her.

Utawarerumono is the story of a small village and its transformation by a masked man without a past.

It started as an tactical RPG / 18+ rated visual novel for the PC. Now, before anyone rushes to or away from it… the sexual content of the PC game is surprisingly low (unless you’re my girlfriend…) while both the PS2 version and anime adaption are completely clean of it (well… except for poor Oboro).

Regaining consciousness, he stumbled out of the building but was shortly escorted back in by the girl he thanked earlier. She introduced herself as Eruru and asked his name, to which he could not respond. At this point, her grandma, Tusukuru, entered and laid him to rest once again.

Waking from sharp pain, he woke once again and noticed the younger girl treating his wounds with a damp cloth. He thought to himself that the two must be sisters, looking similar down to the cute ear and tail accessories which he absentmindedly stroked… only to scare the girl off and earn him a new bruise. Eruru then entered, and he reluctantly let her feed him, and once again…

Shortly after, Eruru asked about cleaning the man’s mask, to which he responded “Am I wearing a mask?” As he touched his own face, he felt something. As he tried to remove it, he felt great pain. 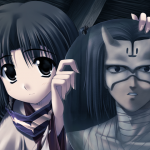 This nameless, masked man was given the name Hakuoro eventually became a respected member of the village. Everything was rather peaceful, aside from a couple skirmishes with wild animals. That is, everything was peaceful until a certain incident caused the villagers to wage war.

Unanimously approved as leader, Hakuoro strategically won; the small village which he had called home now part of a small country which he ruled over. Despite the bloody rise to power, he sought peace. With this, he graciously accepted the help of some powerful mediators. Unfortunately, times of peace were short lived; wars of revenge, lust, power, and rivalry were not far off.

Just like my introduction, the initial plot did drag on a bit; only after the second fight did the pace really start to pick up.

I had first played this game several years ago, long before it was translated, thinking all the time that it was a simple H-game. After ten or so minutes of clicking through moon ruin dialogue, I got to the first fight. Still couldn’t understand a word, but I figured out pretty quickly that it was like playing advanced wars; the battle system have some sort of rock-paper-scizzors style elemental advantages.

I won, skipped past some more dialogue, and was on to my second battle. I couldn’t lose at this point. Well, until I learned half an hour later that the battle was impossible; so, I ran away and won.

Now, having invested a full hour into the game, H-scenes or not I couldn’t just give up. I kept playing, getting more and more drawn into the plot just by the reaction pictures on the visual-novel style sections. I even blazed through some of the explicit scenes just to get back to the plot! After a few days of this, a couple hours of play time each, I had finished and felt satisfied.

Few years ago I once again found this game — but this time fully translated! Copied over my save data, started a new game on a harder difficulty… and got annihilated in the first battle. I ended up reading the instructions, found out that the harder difficulties had a few additional features such as location dependent speed and strength, and started once again on the easier difficulty.

This play through went a bit slower, after all I could now understand the text! The long introduction really made the characters grow on me, [spoiler]which really hurt once my old friends and family were brutally slaughtered…[/spoiler] Understanding the rivalries between my own team members and knowing the personalities of my enemies made the story that much more enjoyable.

Since then, I’ve played through and beaten all six difficulty levels. (Admittedly cheating heavily on the last one)

The anime shares a lot of the good points and bad points. It had a slow start but started the action a few episodes in.

(The anime changed things around a little)

Though… as with all things that come second, it had a hard time living up to the original. The art just wasn’t up to par with the still images from the game nor even the opening animation. While it didn’t stray from the plot, certain moments just didn’t happen the way I had remembered them. It even skipped a few of the humorous side stories (fortunately, one of Touka’s is a separate OVA)

Oh, and we can’t forget the lack of se… I better stop before my girlfriend kills me.

-Plot: Amazing, if not a little slow at the start

-Plot: Pretty good, but some of the subtle changes do detract from the characters

I’ve never played the PS2 version. I might one of these days — I’ve read that there are some changes to the battle system such as items and the ability to do combo moves.

Also, there is a second PC game. Utawarerumono Battle is a beat-em-up featuring many of the characters from the original game. It’s short and fun enough to replay for high scores — but the real fun probably comes from playing as each character in order to unlock the next. I haven’t seen a translated version though… and I’m somewhat curious what the dialogue is for a choice few confrontations.

One thought on “Utawarerumono (Game and Anime review)”

I have been a fan of Jojo for a few years now, I started out reading Stone Ocean, the 6th...

DOGS: Bullets and Carnage OVA 4 episodes. Run time about 15 minutes each. I watched the first two episodes and...

The world has entered the gourmet age! — Follow Toriko, a gourmet hunter, and Komatsu, a 5-star chef, as they...

This isn’t a review of any single manga but rather an overview of all of Itou’s work to date. If...